I figured I had better get motivated and publish this post before you know, July ends.  Which it’s going to, very shortly.  Which brings me to – holy heck this year is traversing it’s portfolio of months fast.  Except the back half of March, which lasted 3 years, I feel like every month of 2020 is lasting about 6 minutes.

I admit it, other than watering and checking in on the plants (okay tomatoes, RIPEN!) I’ve been ignoring the garden.  I did get a little weeding in the trench bed done last weekend, but between the fact that it’s been well over 90 degrees on the weekends, the work we’re still doing on the house and some commitments, the garden has mostly had to tend itself lately.  Which means it’s very weedy, but doing just fine.

But it’s gone completely insane.  In a good way.  The squashes and pumpkins are trailing everywhere, despite my efforts to make them stay up and orderly in their spaces.  Our zucchinis are regularly growing into things that could more accurately be described as baseball bats, and those are in the process of mostly becoming Zucchini Relish for holiday giving – it’s a bit of work, but this stuff is really delicious! And when we’re done with that, anything we don’t immediately eat we’ll shred and freeze the rest for baking. 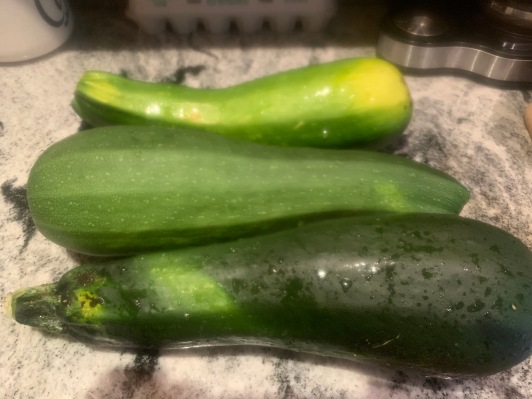 Pumpkins and butternut squash, as well as one Red Kuri squash are also thriving.  From a curcurbita perspective, the garden is the most healthy and productive it has ever been.  The Rouge Vif D’Etampes pumpkins, lovely Cinderella pumpkins that are gorgeous to display and eat – I have at least 4 growing healthily on the vines that I can count.   I’ve always felt lucky to get even one.  This year is a squash year for sure.

While my Son’s Jack Be Little pumpkin plant looks healthy it still doesn’t have any tiny pumpkins yet, but there’s time for that.

But I am still waiting on the first ripe tomato.  Yellow tomato flowers and green ones abound.  But for Sungolds and slicing tomatoes, along with the San Marzanos that feed my desire to make sauce – messy and time consuming, but so delicious in the winter when it’s cold and dark and nothing is growing – I continue to wait, making my pesto, watering my flowers, and dreaming of red and gold.