I’ve never really understood mangoes.  Oh, don’t get me wrong, I like them, immensely, and in almost anything.  In salad, as salsa, in my breakfast smoothies, as a sweet offset to savory Asian food of almost any variety, you name it, mangoes always make it taste just that much better.

But I’ve never quite gotten the hang of how to dissect one (yes, yes, I know, there’s almost certainly some tiresome YouTube guru who can teach me this in a four minute twelve second video if I just took the time. Being perfectly honest with you, I almost certainly will, but I don’t really want to) and I’m completely mystified about how one end of a mango can be completely ripe, if not over-ripe, and the other end can continue to be hard as a rock.  It’s not like they are that big, just over the size of a softball in most cases, so it’s not as though each single fruit is ripening in multiple growing zones.   Also they have the biggest pits – a huge chunk of the mango is actually the pit part.  Pit overachievers, are mangoes.  So I just peel them and slice off a bunch that isn’t pit, and it seems to work out.  But I’m sure there’s a better way that, in all likelihood, I’ll never actually be curious enough to discover. 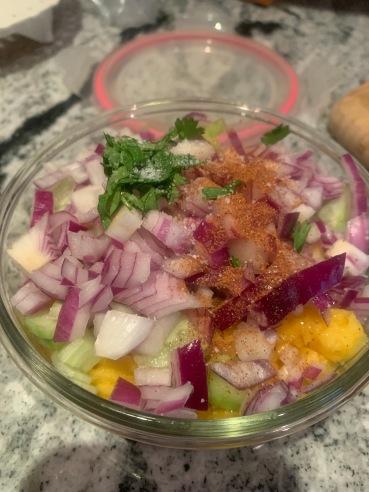 This is the funny thing about adulthood.  It’s almost as much about what you aren’t willing to do as you are.  There’s those things you have to do, and those things you do because you like to, and the things you do because it’s what responsible people do, like making sure your children bathe on the regular, even if sometimes you care a little less than you are supposed to about whether they washed behind their ears properly (they look and smell clean, ok?).  There’s also the things that you would do, as time, money and opportunity present themselves, like exploring Fiji or reading a Bill Bryson book while tucked up in bed with a glass of wine, which is a great way to spend a Saturday evening.

And then there’s the things that you jettison because you simply don’t care enough.  For me, this includes skiing, which everyone around me seems to enjoy, but from my perspective seems just a lot of up and down in cold weather (this from the person who can run for miles without a goal of actually getting to any particular place), watching informative videos, which would bore met to tears but are too boring to elicit that much emotion, or going on cruises, which I’ve always viewed suspiciously, and now that they are Covid-19 hotbeds of infection, seems to be validating my general skepticism of why anyone would want their hotel to be swimming in the ocean when there’s perfectly good land nearby.

So my list of things is almost certainly not yours, and that’s all good.  But one thing we should probably agree on is that the idea that everyone needs to master cooking before actually doing some cooking is just silly.

The average life expectancy of an adult in the United States is 78.4 years.  If you remove the first 18, in which it seems likely that others do the bulk of the cooking, that leaves 60.4 years in which you need to feed yourself, on average 3 times per day.  That’s just over 22,000 meals you have to eat, and if you happen to get married and have a couple children, that’s a lot of food.  And look, I like a bowl of Cheerios for dinner as much as anyone, but there’s only so much of that you can do before you have to do something with food that requires heat and seasoning.

Let’s skip the math of servings for 40 years of marriage and 18 years of kids plus college summers and all the friends of your teens that come over and eat the pantry empty and dinner parties for a bunch of people in which you make 6 kinds of taco fillings because it seemed like a good idea when you were planning the party 2 months earlier but then partway through you realize you never want to eat another taco as long as you live or at least for a week or two, because who gets tired of tacos, really?

Still, you have to feed yourself at some point, and while you can outsource that pretty well, having mastery of at least a few dishes is a great confidence builder.  After all, no one other than your spouse needs to know that you only really know how to cook 3 things, and presumably your spouse likes you for other reasons.

So if you cannot cook do not rush out and try to overachieve, and master some intricate meal with expensive, single use ingredients.  Am I going to tell you to roast a chicken with mascarpone?  Or how to bone a duck?  No, no no.  You should first master enchiladas.  And if you are so inclined, a quick mango salsa to go on top.

Why?  Because enchiladas are incredibly filling, and equally incredibly forgiving.  You can modify almost any part of the recipe.   And mango salsa is delicious and super classy looking.  These two things together will wow a potential date, future in-law, or colleague, and you can post them on Instagram and everyone will ooh and ahh.  Who cares if you haven’t actually folded laundry in 2 years?  You can still achieve Kitchen Godhood.

This is a photogenic meal.  One that a single person could eat for days on.  I just ate some leftovers for lunch and it’s just as delicious the next day.

I need to stop and note here that my husband is the enchilada maker in the family.  His are so good that I don’t even bother trying.  These are not fancy food, they have simple ingredients like enchilada sauce from a can – yes, you can make your own, but that’s an endeavor for later – taco seasoning and cream cheese.  This is accessible cooking at it’s finest, and that’s the first step into the more complex stuff, should you so choose.  It’s simple, it’s pretty, it’s affordable, and it’s cheesy.  What more can you ask for? 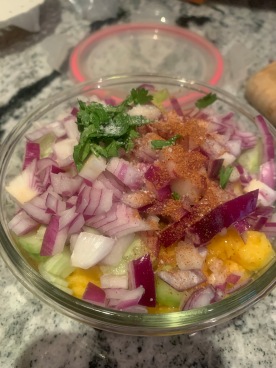 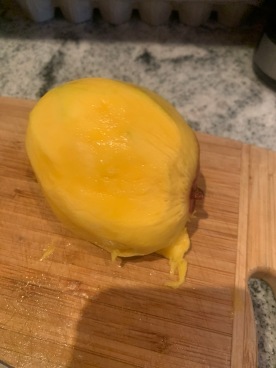 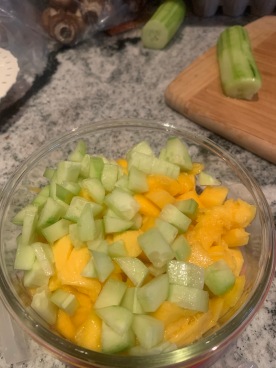 Chop everything, put in a container with a lid, shake well.  Let stand about 2 minutes and shake again before serving.  Also, start with this.  Once you are done chopping and you have a pretty bowl of salsa in front of you, you will probably feel as though you have superpowers.  Whether you put on a cape is up to you.  I don’t judge.

A note on the enchilada recipe – this is a consolidation of my husband’s notes and my editing.  All pictures are by him.

In a well-oiled pan, place chunks of chicken breast and cook over medium-low heat.

When they are cooked most of the way through, one at a time, remove them to a cutting board and shred with a couple forks (you can also cook them in the instant pot with some broth to make them shreddable, about 12 minutes if, like wife, you have no patience for this step)

Put chicken back in the pan, and repeat with each chunk until all chicken is shredded.  Toss in your onion, a bit more olive oil, cream cheese and taco seasoning.  Once everything is cooked together, toss in a handful of shredded cheese.  If you want to add some herbs, jalepenos or some other veggies like peppers, now is the time 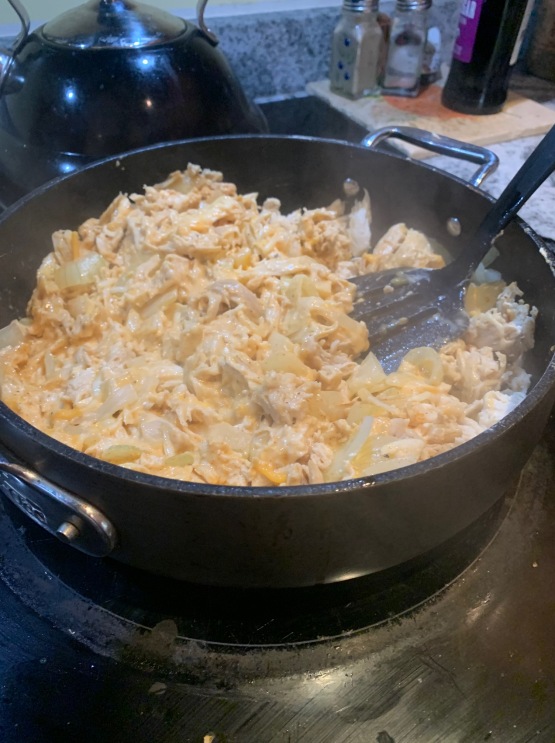 While chicken finishes cooking and cheese is melting still on medium heat, coat a baking dish with olive oil. A 9×12 baking dish is great, but enchilada sizes are flexible so your dish can be, too. Just remember that metal will heat faster than glass, so keep an eye on your dish as it cooks andreduce heat by 25 degrees if using metal.

Gently pour in one can of enchilada sauce over oiled dish, set aside.  Using a clean baking sheet for work surface (cutting boards also work) place a single tortilla on the pan, and fill and roll. 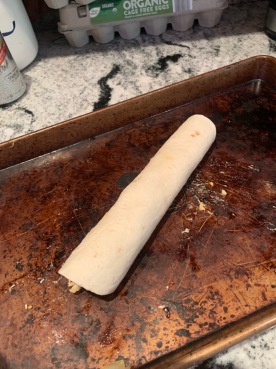 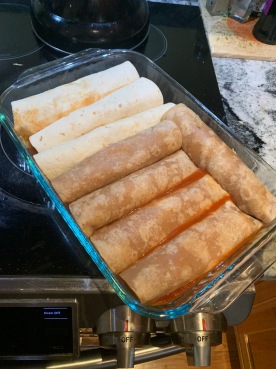 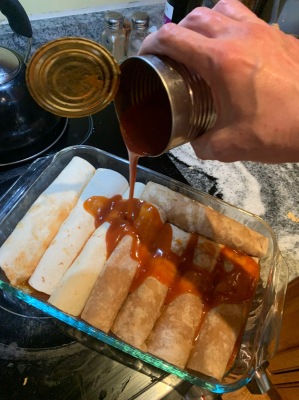 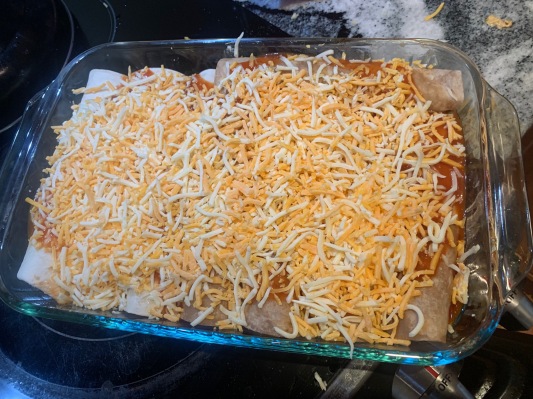 Note from E: I wish I could say there was an art to rolling an enchilada, and maybe there is but I don’t care to learn it. Just put a blob of gooey chicken mix toward one end and roll toward the other. Just remember to place them into the baking dish seam side down.

Place each rolled enchilada in the oiled, enchilada sauce-filled pan as you go.

Now that your enchiladas are all in a row or the shape of a series of poorly cut floor boards in the baking dish, (and your pan and cutting board are soaking in the sink), pour the second can of enchilada sauce over the top. You can coat the whole surface for maximum goo factor, or leave some exposed tortilla, up to you. Sprinkle the remainder of your shredded cheese over the entirety of the dish. Use as much as you like, the “2 cups plus” noted above is just a suggestion. We love cheese, so Eli goes wall to wall with it.

Bake at 375 for 30 to 40 minutes, covered except for the last 10 minutes.  Remove from oven when cheese is browned at the edges and bubbling.  Devour. 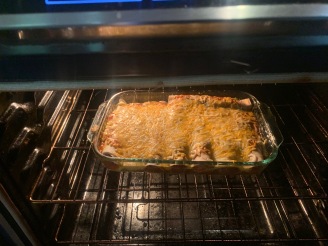 Low carb recipes and snapshots of my British country life