I had hoped this would be my final installment of my series on building a garden, but of course it isn’t.  Melissa and I have been cranking on the fence, and making great progress, but the magnitude of this project, and our mutual schedules mean we need more time.   The funny thing is that it’s totally ok.  I want to be done, and the plants need to go in the ground, but right now we are both so busy that being stressed about what isn’t done isn’t going to do anything but steal joy away from what we have accomplished, which is a ton.  All of the 8′ fence sections are built, and we have 5 more and a gate to put on.

The garden ended up being 40’x18′, smaller than originally planned, but not by much. 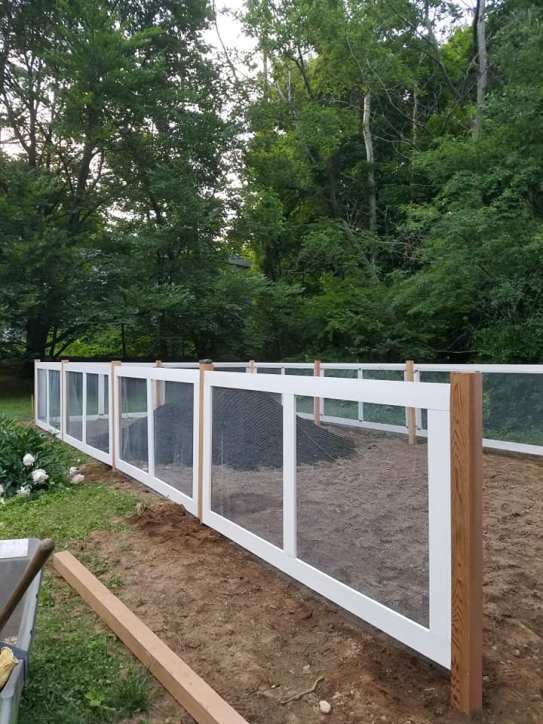 Because I have some work travel coming up, and some of the plants were no longer thriving in their temporary pots, today we stopped construction, and I went to work on building some of the brick beds and planted.   Melissa went off to do some weeding and I immersed myself in measuring, bringing wheelbarrows full of bricks over, and planting.  After a few hours, I had some help from Sithean’s newest resident, H, an Environmental Studies intern staying with us for the summer so she can be close to her summer internship.  She didn’t have to like gardening, or volunteer to help, but both happened.

I built 2 5×5 garden beds today.  On 3 sides are 20″ paths, which will eventually be covered in mulch.  On the fourth side, at the front of the garden, the path is closer to 3′ wide to accomodate Hollyhocks and other fence-climbing plants.  The measuring tape is my best friend these days, keeping my rows of bricks straight and with even distances.

Each bed will eventually be framed internally into smaller squares, but for this year, putting the larger beds in place is what can get done.  Once they were framed out on 3 sides, I added about 3″ of compost on top of the dirt.

I don’t know that I would have chosen to plant as I build, but I’m still pretty satisfied with the result.