I realize Memorial Day weekend is for grill recipes, but I woke up to 52 degrees yesterday morning, which was cold enough to make me burrow back under the covers for a while, not something I typically do.  The smallish people came home last night, and i knew they would be tired and hungry after most of the day in the car, as well as in dire need of bathing.  Soup is simple and filling, and good for a raw, chilly day.

So I pulled what remained of a roasted chicken and some grilled drumsticks out of the freezer, and started some chicken broth.  Chicken Soup with Rice by Maurice Sendak is a favorite book around here, and it’s a favorite meal as well.  I do buy chicken broth for various purposes, but chicken soup with rice is always made from scratch, it’s in my parenting rule book.

Chicken broth is easy.  Chicken carcass, with some meat on it, water to cover it, a little vinegar, and some seasoning – I use garlic, salt, pepper, bay leaves, oregano, and fresh tarragon.  I also save onion peels and other bits of vegetables in a bag in the freezer and add them to the broth to flavor it.  Drop it all in a slow cooker for 6 hours on low, and strain into another pot.  What’s left is chicken broth, really good stuff. 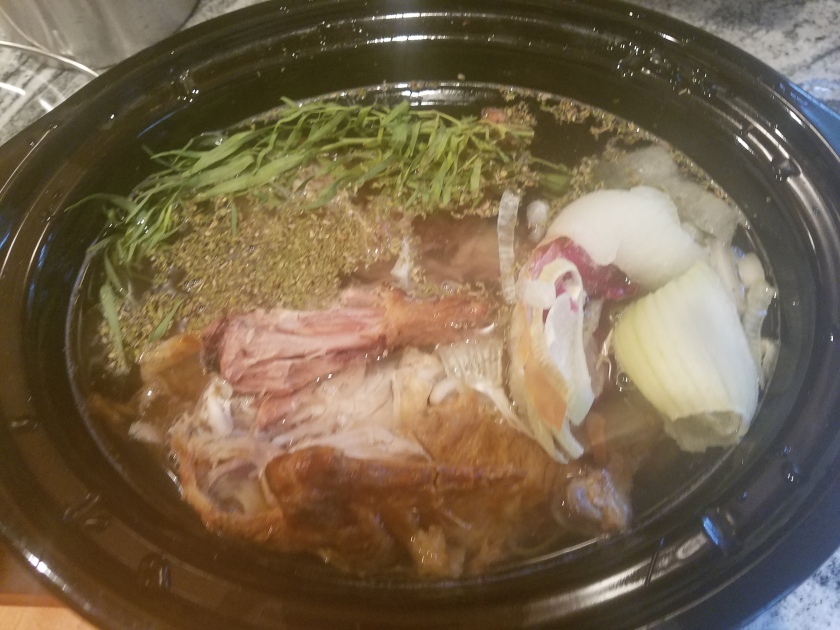 Once the remaining chicken has cooled, strip the meat from the bones, chop up whatever veggies you like (carrot, celery, onion, etc) into the broth and cook for 15 minutes.  Salt and pepper to taste.  After 15 minutes, toss in a cup or so of rice and let cook until soft, about 20 minutes.

I usually add popovers to it, because they are a personal favorite.  If you like them, I recommend investing in a good quality popover pan, because the cheap ones scratch up easily and muffin tins are too small.

Popovers are as simple as it gets.  Mix together in a small bowl:

Oil the popover pan well.  Fill each well to half full, and bake for about 20-25 minutes starting from a cold oven at 400 degrees.  The cold oven is critical, they won’t rise if you start preheating.  I cover mine with tinfoil until the oven hits 400 to ensure the tops don’t burn.

Popovers are easy and quick and look pretty impressive right out of the oven.  They collapse almost right away, but they still taste great.  You can substitute up to 1/4 cup of Paleo flours (I like Cassava Flour) and they will taste just as good, but they won’t rise as well.  If you make them frequently, expect to replace your pan every few years – eventually they go from non-stick to ‘everything sticks’.

I love to grill, but last night’s dinner was the perfect recipe for a cool, grey day Monday. 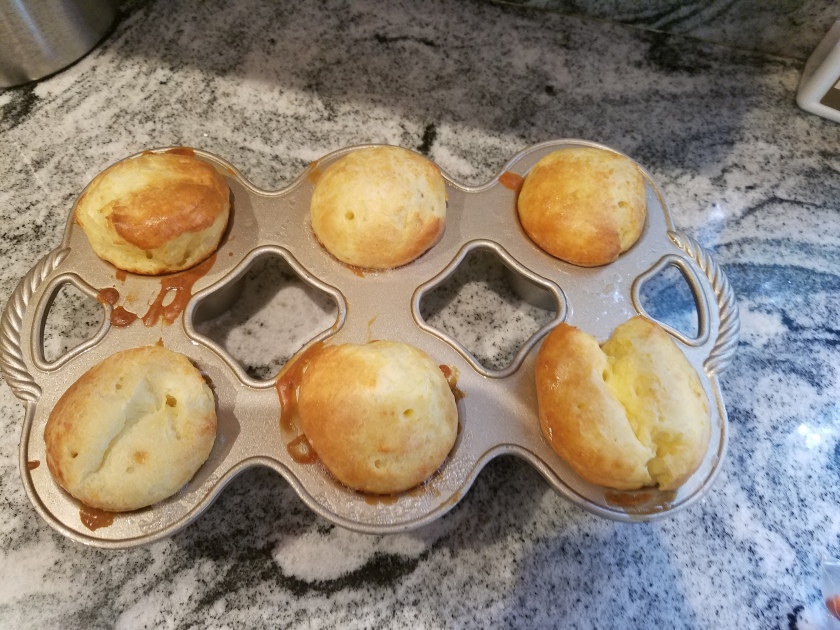