I started seeds a little later than usual this year.  Even though I have had some time off from work, I got more than a little busy over the winter, and the days and weeks snuck by me.  Suddenly it was mid-March.

My seed-starting is very low tech.  Tinfoil trays filled with potting soil, covered in plastic wrap.  I don’t really need grow lights, as the sun through the living room picture window is intense, even blinding sometimes.  I don’t rush – a tray or two a day until the bench is full, and then I come up with creative ways to plant even more, moving tables and other surfaces under windows until there’s no space left.

We gardening addicts are an odd bunch.  Presented with seeds and soil, we begin to think, like dirt-mad scientists, that anything is possible.

Last year, my neighbor and I expanded the existing garden space with the help of her father and his rototiller, which has been going strong since 1971.  It was a productive 18′ (ish) x 30′ (ish) space but by the time we got a fence up, it was a mad rush to plant, and the garden was messy and barely navigable.  This year we sat down over tea to discuss how to create a true potager garden with paths and beds, and ensure we plant the right quantities of what we really need.

When I moved, I had no idea that in addition to the wonderful home, I would be surrounded by wonderful neighbors.  In particular, my closest neighbors have become friends, co-chicken parents, and garden conspirators.  Melissa and Jay are some of the best magic I have found here on the Fairy Hill.  Always game for a new project, when it comes to gardens we have aligned interests – my land gets more sun, so it is the natural location for a large garden space, and many hands make light work.  Also, we love the garden produce equally, and are in general agreement that there can never be too many Sungold tomatoes or zucchini.

You can debate me on the zucchini, but I have yet to grow tired of it, sliced and baked with parmesan and cracked pepper, sauteed as noodles with homemade pesto and chicken, or grilled with balsamic vinegar on a hot summer night.  Zucchini can get a bad rap, but it is easy to grow, prolific, and tasty.

A potager garden is an ornamental vegetable, herb and flower garden.  Around since Medieval times, it centers primarily around food production, with edible florals and a cutting garden often tossed in.  Our garden was going to be a loose mimic of that designed by Carolyn Roehm.

The outlines will be 48×36, with 2 brick-lined 14×14 garden beds laid out in the square-foot method.   Surrounded by 2 1/2 foot wood mulch paths, rows for vegetables and flowers, and with hollyhocks and kiss-me-over-the-garden-gate joining the vining vegetables, such as beans and cucumbers along the fencing, reinforced with wire to keep out wild bunnies, squirrels and other visitors.   We will be bringing in compost to fortify the soil, and lay weed cloth down to ensure that we don’t need to spend every weekend fighting unwelcome guests. It will all be painted slate grey, as the house someday will be.  This is a permanent structure, a year’s effort for a lifetime of productivity.

It’s hard to imagine that the snow will melt and the seeds will grow, with the snow still blanketing the ground, but to garden is to have faith that the cold and darkness will someday depart, and the warmth and sunshine will return.  Because it always does.

Set back off a quiet road, in a country town dotted with stone walls and rolling fields, at the top of a rise called Witch Hill for its association with the Salem Witch Trials, lies Sithean.

Once the servants quarters for an old estate, then the housing for the estate’s unmarried daughters, earning it the nickname The Nunnery, it finally came into the hands of the previous owners from the original owning family 24 years earlier. While I was in no way ready to worry about my love life after the end of a decade-long marriage when we arrived here in late 2016, a single woman living at a place called The Nunnery felt more like a life sentence than a nod to history, so a new name was needed.

My daughter, then 8, believed wholeheartedly in fairies. Her capacity to see magic is profound. With my son, we decided that this house was a special place, perhaps somewhat magical, and so we went seeking the right name. In my searches for a place-name, I came across, again and again, the Scottish Gaelic word Sithean, pronounced shee-an, which means fairy hill.

͛ I didn’t like it at first, but the word, like the house itself had when I first saw it, lingered in my head. Sometimes, I think, we decide. And sometimes we just accept the decision. And so our home became Sithean, even before we moved.

When we moved, I knew this house was going to be my last stop in a lifetime of moving, 5 of them in the previous 2 1/2 years alone.  This was home, and it felt like it, from the first time I came up the long driveway and saw the asparagus fronds, long since bolted, waving in the breeze in the backyard.

Most newly-divorced, not-that-handy women would have faltered and picked the fully renovated Cape, but there was something about this place that called to me, which is to say that the romance of it overruled my common sense.  It had been neglected from needed maintenance for over a decade, the windows leaked cold air, and in the first 14 months, 4 large trees fell in storms, one making a direct hit to the roof.  Sithean is lovely, but not for the faint of heart.

It took a year or so to truly settle in and make it my own, but that first year was productive, with chickens, bunnies, a big garden, and a view that displayed scenes like a Maxfield Parrish painting daily.

Our life here is imperfect.  There are always messes, chores and infinite repairs and maintenance.  The kids fight,  I get tired and order take-out, the laundry sometimes doesn’t get folded.  But it is also a magical mini-farm, a place for daydreams.   As I look out the picture window, over the seedlings that are sitting on my potting bench under it, I am reminded that this place is the only place I ever want to be.

I hope you will love it as much as I do 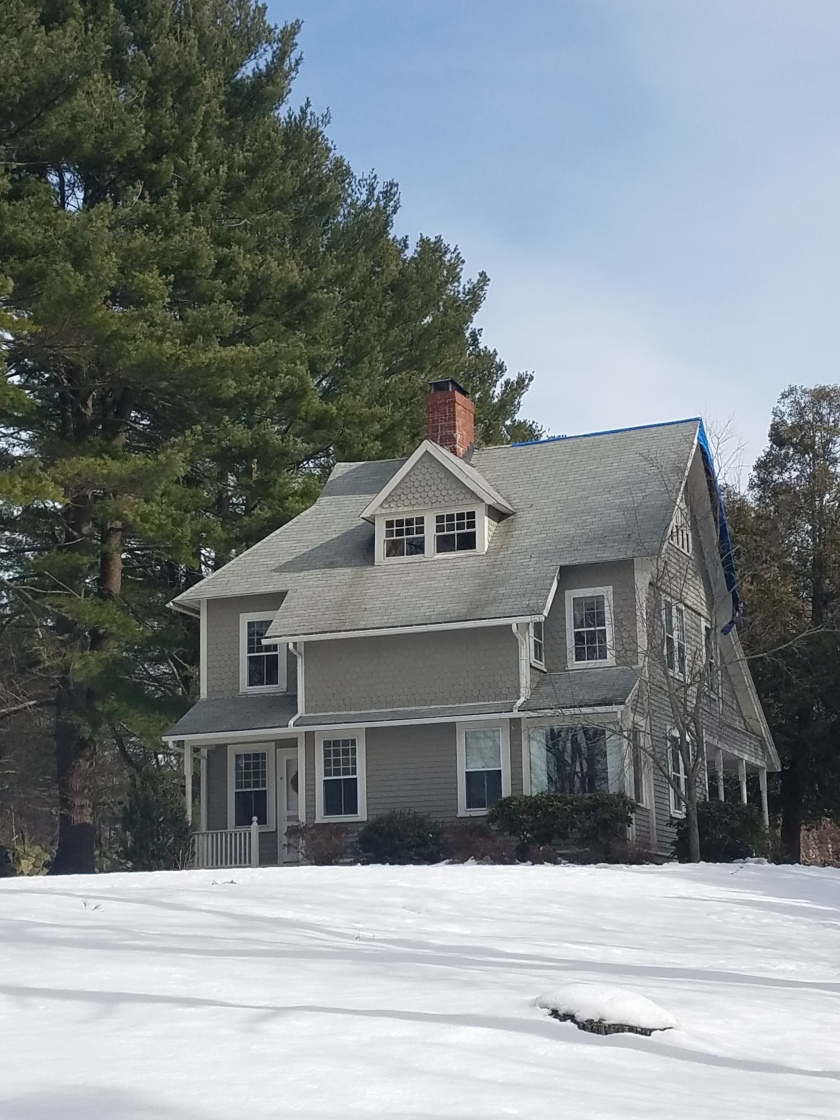 Thanks for joining me!

If the path before you is clear, you are probably on someone else’s. – Joseph Campbell

All stories, at least the good ones, begin with some variation of ‘Once Upon a Time’

͛This is one of the good ones.

Once upon a time, at the age of 43, she started over.  It wasn’t completely over, because she had 2 beautiful, amazing children and running shoes, some  furniture and enough money to buy a home to live in, but not much else.

This blog is my story.  It’s a story of our lives, and the lives of the people who came to live at a place called Sithean, or ‘Faery Hill’ in Scottish Gaelic.  It is a story of food and gardens, of loss and renewal, of love.  And most of all, of home.

Nothing in my life has turned out the way I expected.  Every time I thought I was on one path, it veered.  And yet those roads, while filled with brambles and thorns, were also filled with flowers and friends and so much love.

I write this from my kitchen, more than a year after the story started.  I hope you will enjoy my fairy tale as much as I do.